Ambitious proposals for the conversion of an Oughtibridge mill into a food hall, community hub and leisure facility have been approved by Sheffield City Council. 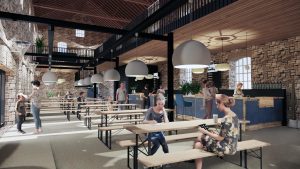 The project will form the heart of Sky-House Co’s plans to bring a new generation of housing design to the former British Tissues site.

Sky-House Co has already been given approval to create 35 of its Sky House homes – a back-to-back housing concept created by architects and planners at multi-disciplinary practice CODA – at the former industrial location.

The old Mill Cottages will also be converted into four apartments and a cottage, bringing the total number to 40 homes.

And the latest approval will now see work begin on the conversion of the site’s existing mill building into a mixed use food hall, community hub and leisure facility, with facilities for start up businesses too.

Sky-House Co co-founder, David Cross, said: “We are in talks with The Cutlery Works, who are very interested in the food hall development, which would bring a new dining experience to the north of Sheffield and serve what is set to become one of the city’s most ambitious residential developments…

2nd December 20202nd December 2020 Bloomberg
As the pandemic keeps audiences away, developers could soon face an adaptive reuse dilemma: What can you do with dead megaplexes When a...

1st December 20201st December 2020 OzSeeker
Sir Philip Green’s Topshop Arcadia retail empire has said it is “working on a number of contingency options,” after reports it is days away...

US restaurant closures could accelerate as winter sets in

2nd December 20202nd December 2020 Bloomberg
As the pandemic keeps audiences away, developers could soon face an adaptive reuse dilemma: What can you do with dead megaplexes When a...

Cineworld PLC considers CVA – what does this mean for cinema’s future?

Vue to open new Glasgow site in 2021: ‘We strongly believe in the future of cinema’